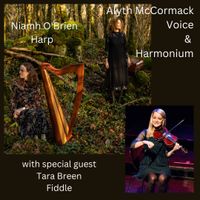 “Alyth McCormack loves singing, and lets you know that without telling you. You can hear it in her voice.” The List.

Though she has earned acclaim for the matchless way she delivers the Scottish Gaelic songs on which she was raised, she is also known for her incredible diversity. Celebrated for her work with The Chieftains Alyth has shared the stage with folk greats like Martin Carthy & Norma Waterson, jazz musicians like Edward Simon, rock great Ry Cooder and country icon Trace Adkins. She also dueted with the legendary Kris Kristofferson and others ranging from Brazilian ensembles to Bulgarian voice choirs.

Alyth will be joined by:

Niamh O’ Brien: a harp player, composer and singer from Co. Limerick. She has performed in Ireland, Europe and America as a solo artist and with traditional groups such as An Tara, Mick Molony, Hoodman Blind and The Chieftains.

Tara Breen: highly talented multi-instrumentalist from Ruan Co. Clare, has achieved All-Ireland titles on fiddle in every age category over the years, culminating with the All-Ireland Senior Fiddle Title in 2012. Tara is also an All-Ireland winner on the flute and saxophone. Tara works with Donal Lunny, Carlos Núñez, Padraig Rynne, Stockton’s Wing & in 2014 she joined six-time Grammy award winning band, The Chieftains.

"As the title suggests, Aig an taigh was recorded at home. During the pandemic, we had time to reflect and learn. My husband (Noel Eccles) and I had never spent so much time together nor collaborated in such limited circumstances. Voice and percussion might not be the first combination you think of, but we decided to sit down and figure it out.

Niamh O’Brien and I regularly tour Germany, but as tours were cancelled due to Covid-19, we decided to record a concert at home together to connect. Recording ourselves, we were out of our comfort zone: I felt a need to get back to my roots. We looked at some familiar songs before adding new ones. I feel a real sense of gratitude for where we live in Co. Wexford; the landscape surrounding us is inspiring, so we let it take a hand in guiding us.

This album is dedicated to Paddy Moloney. Noel and I both worked extensively with Paddy. Initially, he was my boss, but latterly he was my friend. I learned so much from working with Paddy and The Chieftains. He was driven, passionate, full of mischief, dedicated, talented, and a natural collaborator; he introduced me to a world of music, musicians, singers, and dancers. I am so grateful, and Paddy, you are sorely missed."